LEARN MORE ABOUT HOW BUYING AMERICAN-MADE PRODUCTS STRENGTHENS OUR COUNTRY.

1 in stock (can be backordered)

Found on small bodies of water with plenty of aquatic vegetation, gadwalls breed mainly in the Central Plains of the United States and Canada. They like to feed in slightly deeper water than other dabbling ducks. Gadwall decoys can be mixed in with mallard decoys which is a very effective and realistic combination. Our 17” gadwall decoy is a dead ringer for this medium-distance migrant. These ducks migrate early but become wary in late season. Fight late season, gun-wise gadwalls with G&H GD70 Gadwall. Each one dozen carton comes with six drakes and six hens with resting swivel heads, custom hand-painted in the same American Heartland where they breed.

1 in stock (can be backordered)

There are no reviews yet.

Only logged in customers who have purchased this product may leave a review.

Your cart is currently empty. 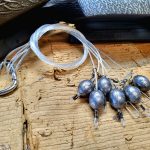 Hebert's Decoy Rigs - Made in the USA